All the Colombian coffees reviewed in this article are top-rated on Amazon and highly praised by consumers.

The Colombian Supremo Coffee by Fresh Roasted Coffee LLC is a medium roast coffee with unique flavors. The dominant notes of the coffee are earthy and cherry, however, you can also sense a more subtle honey sweetness while enjoying the brew.

The Fresh Roasted Coffee LLC Colombian Supremo is definitely different than the traditional Colombian flavors but the mild acidity and the full-bodied brew make this coffee a crowd-pleaser.

The beans are sustainably sourced and fair trade. While they are harvested in Colombia, the beans are roasted, blended, and packaged in the USA.

The beans in Colombian Single Origin are 100% Arabica. The coffee is a medium-dark roast with balanced flavors, full-body, and mild acidity. To ensure optimal freshness, Java Planet roasts the beans in small batches. You can see the roasting date stamped on the package.

Java Planet is a family business that wants to deliver you the best cup of coffee every time. While their coffee is definitely top quality, it’s still up to you to determine if you consider it to be the best in the world or not. However, what we can say for sure is that, out of all the brands, Java Planet is definitely the best for the planet. The beans used by the company are USDA-certified and Fair Trade. Furthermore, Java Planet is part of the Rainforest Alliance, an international non-governmental organization that promotes conservation and sustainability. Lastly, the company is Bird Friendly, which means they respect strict guidelines for biodiversity, tree height, and foliage cover.

Another Colombian coffee made with 100% Arabica beans is McCafe’s Colombian Roast Ground Coffee. If you are a fan of McDonald’s coffee, you are probably familiar with the taste of this bold dark roast. The McCafe Colombian Roast Ground Coffee has a rich aroma, a dark flavor, and a smooth body. And, if you have a coffee maker that can brew coffee at 204 degrees F, you will be able to make yourself a cup of coffee that tastes exactly like the one you can purchase at McDonald’s. If you want robust flavors and a strong brew at an affordable price, this one is probably for you.

Jose’s Whole Bean Coffee Colombia Supremo is a medium roast coffee with a sweet and floral aroma. The coffee has a strong and intense taste but the wine and fruity notes make it very enjoyable. If you like your brew strong, these beans are a great option for you. In addition, you’ll have to use only a little to get that strong, flavorful brew that instantly wakes you up.

Jose’s coffee is made with Colombia Supremo, which are considered to be some of the best beans in the world.

Another important aspect to mention is that Jose’s uses sustainable practices during the growing, harvesting, and roasting process.

Affordable but with a rich and full aroma, Kirkland Signature 100% Colombian Coffee is a ground coffee that makes a strong and flavorful brew. Most importantly, although it’s strong, this brew is not at all bitter, which is a common problem with affordable dark roast Colombia coffee.

It is important to note that the grinds are finer than those of other brands so it takes more than usual to make yourself a cup because the coffee takes longer to drain. However, this also means that you can make a strong brew using less coffee than usual.

Cafe Don Pablo Gourmet Coffee Colombian Supremo is a medium-dark roast with a rich but mild aroma and a sweet citrus flavor. This Cafe Don Pablo is a whole-bean Arabica with low acidity, medium body, and a smooth cocoa-walnut finish note.

Café Don Pablo’s facility is certified for organic production but also for food safety. Furthermore, the company cares about the freshness of your coffee and, instead of following a strict production schedule, they roast to order to ensure each and every batch provides the same freshness and flavor.

Why Colombian Coffee Is The Best?

For Colombians, growing, harvesting, and roasting beans is an integral part of their cultural identity. Thanks to the country’s high-altitude and climate conditions, Colombia is the perfect place for coffee production, particularly for Arabica beans. That’s why the country is the world’s leading producer of coffee.

What makes Colombian coffee so special is the harvesting process. Colombian farmers harvest the beans by hand. Machines cannot tell the difference between unripe, overripe and green beans but the farmers can certainly recognize ideal coffee cherries. This hand-picking process definitely contributes to the top-notch quality of the Colombian coffee.

Moreover, Colombia has a 100% Arabica status, which means they only grow and harvest Arabica beans. The two main types of beans are Arabica and Robusta. Arabica is not only superior but it has a slightly sweet taste and contains less caffeine than Robusta. When it comes to taste, Arabica is milder and Robusta has a harsher taste.

Needless to say, all these factors contribute to the quality of Columbian coffee.

Supremo and Excelso are terms used to describe and rate the coffee beans in Colombia. Both terms refer to premium, high-quality beans.

Size matters in coffee production. Generally speaking, larger beans are of higher quality than smaller beans. Supremo is the largest graded bean, therefore it is considered superior to Excelso and other types of Colombian beans. However, Excelso is still highly graded and it’s only slightly smaller than Supremo.

While coffee bean size matters in coffee production, at the end of the day, it’s all a matter of personal taste. Some people prefer Excelso over Supremo. Both types are premium quality anyway so either will be an excellent option for coffee lovers who have a soft spot for Columbian coffee. 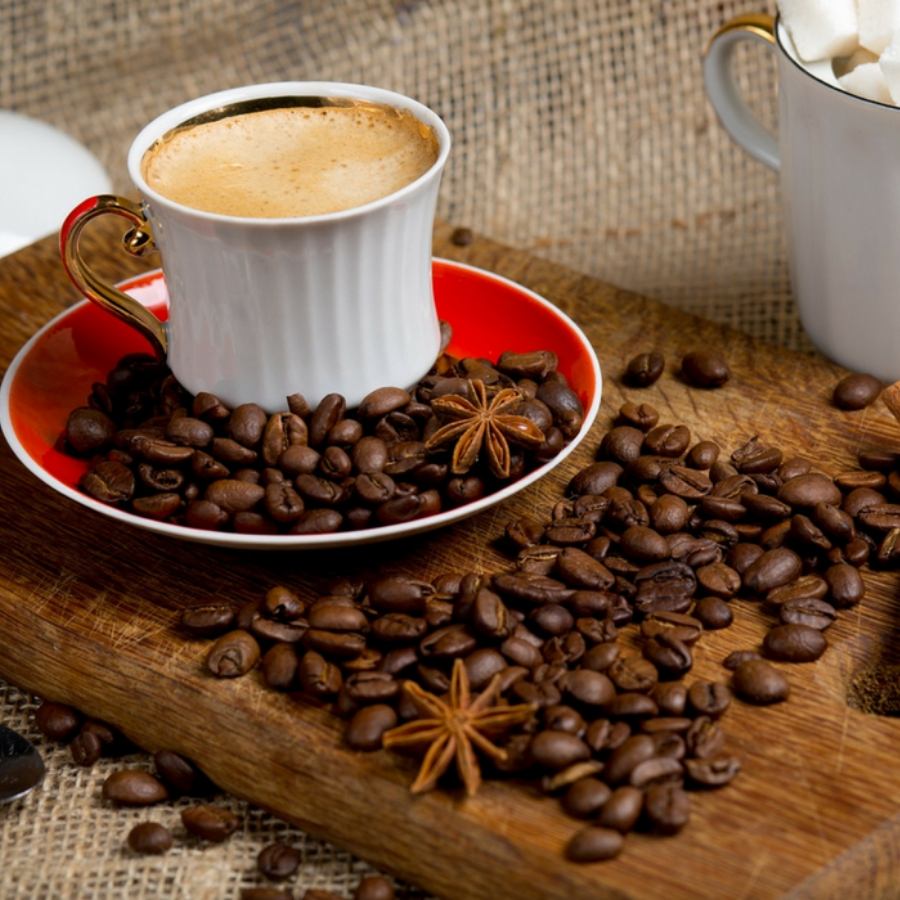 Generally speaking, Colombian coffee is well-balanced and mild. Also, the flavor list often includes floral, fruity, and chocolate notes. For the aroma profile, you can typically expect citrus and spice. However, these baselines can differ from region to region due to climate conditions and altitude. There are a few notable differences between the different coffee regions in Colombia. We’re not going to discuss all the regions because there are over 20 and the variations between some of them are barely noticeable. But we will discuss the four main coffee regions to see what to expect in terms of taste, flavor, and aroma.

The coffee beans harvested in Northern Colombia have more body and less acidity than the beans from the other regions. They also seem to be more nutty or chocolatey in flavor rather than fruity or floral.

Central Colombia’s coffee beans have higher acidity. They also tend to be more fruity and herbal than the beans harvested in other parts of the country. The Central region is the country’s most renowned area for coffee production and the area that is oftentimes linked to premium Colombian coffee. If you see “MAM” on a bag of coffee, you’re probably holding a bag of premium coffee produced in Medellin, Armenia or Manizales, three regions known as the Colombian Triangle. The Colombian Triangle is situated in Central Colombia is known for producing high-quality, amazing coffee.

The Southern beans have stronger acidity and stronger citrus notes. The coffee produced in this region is also considered high-quality, however, the region focuses more on specialty coffee rather than traditional Colombian flavors. In the New Columbian Coffee Triangle, as the South is often referred to, the beans have a prominent aroma, caramel, and fruity notes.

Lastly, the East is the smallest region out of the four main ones. The climate in this region is similar to the one in the North, thus the coffee beans are also similar in acidity, flavor, and aroma. So you can expect fruity and floral flavors but also nutty and cocoa notes. Also, less acidity than for the beans harvested in the Central and Southern Colombia.

What Coffee Do Colombians Drink?

Obviously not all Colombians like making and drinking their coffee the same way but most of them like it black and sweetened (tinto) or with hot milk (cafe con leche).

As for the brewing process, don’t picture any modern machines. Typically, Colombians like to brew their coffees on the stove. For this, they boil water into a pot. Once the water is boiling, they remove the pot from heat, add coffee, then place the pot back on the heat. When the pot is back on the heat, they stir the grinds in the water for a couple of minutes. Once they are done with this step, they turn the heat off and wait for the grinds to settle at the bottom of the pot. This is how tinto, the beloved Colombian brew, is typically made.

Some like to add sugar to the water while others prefer to add sugar once the brew is ready. Either way, traditional tinto is always made with sugar.

Colombians really love their coffee and the world really loves Colombian coffee. When you purchase a bag of Colombian coffee, you know that you buy premium quality coffee with an amazing taste and flavor. So it all comes down to the type of roast you prefer and the flavor and notes you like. It’s also up to you to decide between ground coffee and whole beans. Even though, we recommend ground beans only if you can go through a bag of coffee quickly. Ground coffee loses flavor over time and you don’t want that to happen to your flavorful Colombian coffee.